Hi everyone, today’s post is all about a NEW mascara released by Urban Decay called “Trouble Maker” – now this is a very saucy mascara as it’s described as ‘super fat, super long and sex proof’. Got your attention yet? Lol. Okay good.

Before I get into the claims and the mathematics of the cost lets talk about the packaging. The Urban Decay ‘Trouble Maker’ mascara is housed in a holographic oil-slick outer packaging which is visually pleasing and lightweight. I liked the effort that they put into the packaging because it’s not a cheap mascara so you’re getting a great packaged product.

Lets get to the some of the claims, it promises to:

The actual wand is very interesting: it’s like a circular combed teeth wand (if that makes any sense lol). And the little teeth alternate in length, this may attribute to the claims of lengthening one’s lashes. In addition, if you look closely you’ll see tiny black hair-like particles that look surprisingly natural when your apply it onto your eye lashes.  The only hiccup I had was fear that it would get into my eyeballs – so in that respect you have to be very careful with application.

Lets get to the APPLICATION & WEAR TEST! 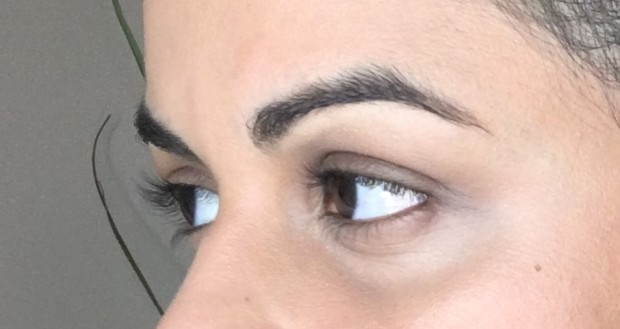 As you an see from the application – it’s a rich deep pigmented black colour and it held up well after 7 hours of wear. What’s interesting and by interesting I mean AMAZING is that it maintained curled lashes throughout the day. What really stood out however was the smell of this mascara which I’ve never encountered before. It’s not the most pleasant smelling mascara, in fact it smells like burning tires which did linger on throughout the entire day. For that reason I haven’t continued to wear it since this wear test – so if you’re interested in purchasing or trying this mascara I highly recommend smelling it in store before purchasing.

Overall, I think it is a fairly decent mascara: I don’t think it delivers as much volume as promised and the smell is really off putting for me personally. Let me know if you’ve tried this mascara or if you’re interested in trying it? This mascara is available at Sephora and the Urban Decay website.